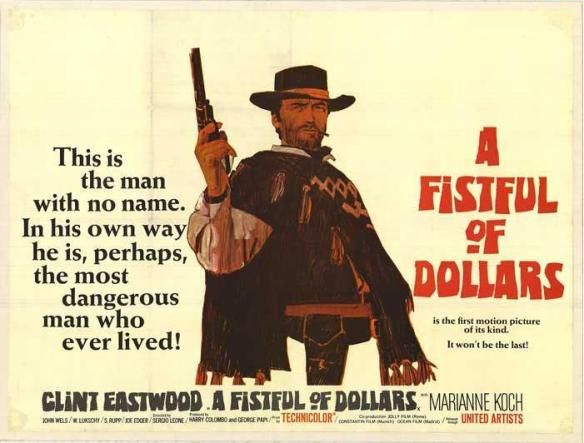 (I am reposting this story on the occasion of Ennio Morricone’s passing. Among other things, this museum show explored the influence that avant-garde New Music had on Morricone’s famous score for “The Good, the Bad and the Ugly.”)

It would be fitting if, for the duration of its “Once Upon a Time in Italy…the Westerns of Sergio Leone” exhibit, the Autry National Center called itself the Museum With No Name.

For Italian film director Leone is most famous for transforming TV actor Clint Eastwood into the enduringly mythic Man With No Name in a series of three mid-1960s “spaghetti Westerns”: “A Fistful of Dollars,” “For a Few Dollars More” and “The Good, the Bad and the Ugly.”

The history and impact of those films, as well as of Leone’s artistry, are the subjects of this innovative and surprising multimedia exhibit at the Autry’s Museum of the American West in Griffith Park through Jan. 22.

Leone changed the very nature of Westerns, as well as notions of movie heroism/anti-heroism in his Eastwood movies and his subsequent epic, 1968’s “Once Upon a Time in the West.” Leone saved the movie Western, which had lost its audience to TV cowboy shows in the early 1960s, by making it cool and new for Boomer-era teenagers.

“We focus on his Westerns because the West is the mission of this museum,” says the Autry’s Estella Chung, the show’s co-curator. “And the work he did with Westerns is groundbreaking.”

The accomplishment of creating the Man With No Name persona is so great that it’s trumpeted by a rare 1966 poster at the entranceway to this show. It has neither the film’s name nor the star’s on it. Rather, it contains three illustrations of a rather disreputable-looking, shadowy character. One can’t tell whether it’s Eastwood or not.

Thus was movie history and pop-cultural mythos changed. But as Chung explains, Leone didn’t plan it that way. An original Italian-language script on display in the show reveals that Eastwood’s character at first was named “Ray.” But that got dropped as unnecessary exposition.

The Eastwood films were made cheaply in Spain and released in Italy between 1964 and 1966, where “Spaghetti Westerns” were such a radical new idea that Leone at first tried to pretend he was American. An early Italian film poster here lists the first film’s director as “Bob Robertson,” an alias. But the films became hits, despite the fact the casts were polyglots of various nationalities.

Yet when MGM was getting ready to release them in the U.S. in 1967, it was stymied from a marketing standpoint. Why would Americans want to see an Italian-made Western? So it decided to hype the lead character’s lack of a name. It worked. “That mystique was a marketing ploy,” Chung says.

This is not only the largest exhibit devoted to Leone, who died in 1989 of a heart attack at just age 60, but Chung says it’s also the biggest devoted to a motion-picture director, period. The show was co-curated by Sir Christopher Frayling, a Leone biographer as well as the chairman of Arts Council England.

Objects were loaned by Leone’s collaborators on his films, including Eastwood. The actor also serves on a star-studded Leone Film Arts Committee created by the Autry for this show. And there is far more than movie posters here. “We made a decision to only bring in material that had maintained its original look since used in his films,” Chung says. “And we were lucky to find so much.”

Plentiful background material, including old photos and comic books, show how Leone, the son of a director and silent-film actress, grew up in Italy fascinated by American pulp fiction. In 1946, he entered the busy Italian film industry and worked on many English-language sword-and-sandal movies being filmed at Rome’s Cinecitta studios, including “Ben-Hur.” In 1960, he directed his first movie, “The Colossus of Rhodes.”

In 1963, he saw Japanese director Akira Kurosawa’s samurai-warrior film “Yojimbo” and was impressed with its loner, man-of-few-words star. “He said if you got rid of the swords and put a cowboy hat on the guy, you’d have a terrific Western,” Chung says.

This exhibit is at its best in showing how Leone was attracted to Eastwood. On a video monitor, it plays a scene from a 1961 episode of the TV series “Rawhide,” in which Eastwood played Rowdy Yates. Called “Incident of the Black Sheep,” it shows a quiet Eastwood exuding authority. “This is where he thought Clint Eastwood could be a star,” Chung says. “The myth is that he took a picture of Eastwood, drew some stubble, and put a cigarillo in his mouth to see if he made a star.”

The exhibit features original set-design illustrations and costumes worn by actors in “Once Upon a Time in the West” and a later Leone Western from the early 1970s, “Duck You Sucker.” (A gangster film that Leone made in the 1980s, “Once Upon a Time in America,” is not part of this show’s reach.)

The most famous object here is probably Eastwood’s trademark poncho (with sewn-up bullet holes). It’s in a case. “A lot of fans are curious about the origins of the poncho,” Chung says. “In the original script, he’d taken the poncho from a man taking a bath by the side of a river. But that scene was never shot. So we have the script explaining it all – in Italian.”

Another illuminating artifact is a script bearing the terms “primo piano” and “primissimo piano” as well as “P.P.” and “P.P.P.” Those mean “close-up” and “extreme close-up,” hallmarks of the groundbreaking way Leone chose to shoot gunfights to extend tension. Those brief notations represent five long minutes of actual screen time.

To recreate the proper environment for “Once Upon a Time in the West” artifacts and film clips, the museum commissioned a fiberglass life-size sculpture of the memorable opening scene, in which three gunmen waiting at a train station for “Harmonica’s” (Charles Bronson) arrival. That sequence, itself, plays on a screen with its eloquently eerie, famous soundtrack of just background noises, except for Bronson “talking” through his harmonica.

That was the idea of Leone’s musical collaborator, Ennio Morricone, whose quirky, eccentric work also is very much part of this exhibit. “Morricone had written music for that scene, but then he went to a concert of ‘incidental sounds,’ where all sound plays a part in the definition of music,” Chung says.

“In this case, it was of a man moving a ladder on stage and making a creaking sound. So he told Leone about it and they decided to do that approach in the film.”

From such disparate and unusual sources was an American cultural legacy made.