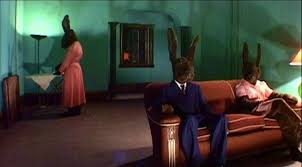 The first is by far the most popular, with its single protagonist, external conflict and closed, tightly wrapped-up endings. Minimalist comes next – challenging narratives with multiple protagonists, inner conflicts and sometimes-ambiguous open endings. And then there’s anti-structure — films not afraid to call attention to themselves as films first, stories second. David Lynch, for instance.

“When you go down the triangle, you’re eliminating the audience,” McKee said during a Los Angeles seminar this year. “Absolute forms of minimalism and anti-structure just don’t seem like life to them. What you’re left with are cineaste intellectuals who like to have their worlds twisted every now and then.”

Well, maybe. But there sure seem to be a lot of movies out this fall — big-budget, high-profile Hollywood productions as well as smaller art films — that toy with or completely embrace these “audience-eliminating” styles. A few examples:

So what gives? It seems to be the impact of several outside external sources: Heralded self-referencing screenwriter Charlie Kaufman (“Being John Malkovich,” “Adaptation”); the Oscar-winning success Paul Haggis’ ensemble drama “Crash”; the impact of hit television dramas influenced by “Hill Street Blues;” and the ongoing pressure for auteurist directors and writers to establish credentials by offering something new.

“We’ve run out of new content,” says Howard Suber, a longtime professor of story structure at UCLA’s School of Theater, Film and Television and author of “The Power of Film.” “It’s hard to think of any subject, any kind of story, where somebody could say, ‘No film has ever talked about what this film talks about.’ That leaves, if there are aspirations to be an artistic filmmaker, experiments with style.”

This seems to have been a motivation for Shainberg and his writing partner, Erin Cressida Wilson, on “Fur: An Imaginary Portrait of Diane Arbus.” In a way, it’s stylistically an anti-biopic – similar in inspiration to the way writer Kaufman in 2002’s “Adaptation” turned Susan Orlean’s book “The Orchid Thief,” about an orchid collector, into a weird meta-struggle between Kaufman and his twin brother (both played by Nicolas Cage) to adopt Orlean’s book.

Another such “anti-biopic” may appear in 2007 – Todd Haynes’ “I’m Not There: Suppositions on a Film Concerning Dylan” – in which seven actors, including Cate Blanchett and Richard Gere, play Bob Dylan at different career stages.

“Why is this happening? I could give you a meta-answer,” Shainberg says. “It’s about how much media there is. It’s about how much information we get about everyone and how just portraying it straight really isn’t interesting anymore.”

That explains the motivation. But why is the audience receptive – or, at least, not in open revolt – to such experimentation? Because film is a very good medium for it. It’s especially good for directors who want to visually play with the logical order of time and space. “One of the things film does better than any other medium is cut back and forth between time and space,” Suber says.

Filmmakers historically have been more conservative about narrative experiments. Directors and writers felt they inherited a tradition going back to Greek theater of basic stories around a major problem of a central character, with all else secondary. Successful variations were few, like Robert Altman’s “Nashville,” because audiences tended to view open-ended multi-character stories as dramatically flat or too complicated to follow.

Suber says ensemble-cast television dramas with ongoing “multithreaded” plots, especially the groundbreaking “Hill Street Blues” of the 1980s and later “ER,” changed the audience. “It took the audience a long time to deal with what was initially confusing,” he says. “But once they learned, they had learned storytelling that was infinitely more complicated.”

And films are eager to take advantage of that.