A friend of mine, a well-traveled music aficionado, was explaining – as we were waiting for Calexico to follow Sharon Van Etten on stage at this year’s Nelsonville Music Festival – why this has become his favorite fest. “They don’t blow you out with loudness. And it’s carefully curated.”

That’s so true. For every act that performed, from sound-design sophisticates like Wilco to acoustic minimalist Jonathan Richman, you could hear every word they sang. At bigger festivals (at Nelsonville, on the grounds of Hocking College, the main stage faces an open field that can only hold several thousand) the rock acts tend to crank up the volume to such a painful level you wait for the birds flying overhead to land and surrender.

And yet, at the same time, Nelsonville isn’t a predictable roots-music fest full of alt-country troubadours and/or polite bluegrass/folk bands. It has them, true, but it is idiosyncratically programmed with a sharp eye. It leans to the “organic” side of alt-rock (no EDM acts) with a couple headlining legends, but is full of surprises.

And it can rock out – Shilpa Ray proved that at about 1 a.m. on Sunday morning, howling and screaming (with precise diction and that unusual twist of bittersweet vocal warmth that makes her so engaging) her post-punk blues mantras into the cool night air while she played harmonium and her accompanists provided musical heat.

Nelsonville also is a pleasant, semi-rural environment in a part of the country – southeastern Ohio, near the college town of Athens – that seems to be a haven for well-preserved older hippies and younger folk who respect their elders’ musical values taste in hair styles and colorful clothing, including brightly patterned sundresses and wry t-shirts like “Bad Spellers Untie!”

The fest also has its mysteries. For a few acts, signers for the hearing-impaired stand to the side of the stage and provide a translation of lyrics as they’re being sung. It was often a dancing commentary – the signers used a lot of body language. Who exactly they were signing for was a mystery. It’s possible they were Hocking College students on assignment, but nobody I asked had any idea.

All this local flavor may be why it not only can attract acts that seem a little too big for the festival’s scale, but also why the musicians seem to praise it so highly from the stage.

I caught three of festival’s four days, missing opening-night (Thursday) headliner Gogol Bordello. Of those I watched, only a couple were disappointing, for reasons not entirely the artists’ fault.

Cat Power – who had to follow a long rain delay on Friday night – gave a somewhat meandering set as her voice and wandering stage presence didn’t seem up to her ensemble’s strong playing and back-up singing on numbers from her last album, Sun.

And after a long Saturday-night rain delay interrupted her set, Mavis Staples elected to not continue. “God told Mavis she needs to sit down,” the emcee intoned from the stage. It was a shame because Wilco’s Jeff Tweedy had just joined her onstage for “You Are Not Alone” – the title song from the 2011 album he produced for her – before the storm struck. She also had done a strong, tantalizing version of Funkadelic’s “Can You Get to That” from the upcoming, Tweedy-produced One True Vine album. Everyone wanted more.

After that Saturday storm, Wilco played the night’s centerpiece set. Over the years – decades – Tweedy has put together a distinctive sound, a creative amalgam of his favorite strains of rock. On many of the set’s songs, he started out on acoustic guitar with his shaky voice perfect for straightforward Americana music, where the words are more important than the technical perfection of the vocals.

But as the band would kick in to expand the sound with orchestral grandeur, the hooks and choruses emerged and revealed the selections as pop songs, or at least commercially oriented sing-along alt-rock songs. And then Wilco’s showcase guitarist (and secret weapon), Nels Cline, would take over for a blisteringly transcendent lead with avant-garde overtones that echo fusion-jazz and No Wave. Each song was a veritable mix tape.

Wilco’s enthusiastic set, which Calexico – which had played earlier – joined toward the end, featured a long encore that left everyone satiated. It also left me to wonder what the heck Wilco is doing playing back-up to Bob Dylan (and even My Morning Jacket) on the upcoming Americanarama tour.

The fest, which is run by (and raises funds for) the 135-year-old Stuart’s Opera House in downtown Nelsonville, showed its prescience about the pop side of alt-rock with numerous bookings. One especially successful one was the five-member – three men, two women – Brooklyn band Lucius, whose first album isn’t yet out.

Outfitted a bit like Devo with their matching black tops and green pants/leggings (and the women had pretzel-twist hair styles), they were capable of a poundingly irresistible multi-rhythmic attack. On one number, “Genevieve,” four members played percussion instruments, including a wooden block, at once. But they also had a fine sense of melody, with catchy and arrestingly songs that emanated joy.

And as an example of Nelsonville’s prescience in booking rising folk-rock singer-songwriters, there was Joe Pug’s involving set. The blossoming Chicago troubadour’s heartfelt songs delicately straddled melancholy, until his guitar and harmonica let them soar forward. He seemed inspired by Bruce Springsteen’s intimate, introspective side (“Atlantic City”), and could be a successor. Playing with two accompanists on a secondary stage, he showcased excellent compositions like “Speak Plainly, Diana” and “Hymn 105.” He also championed an unknown writer named Harvey Thomas Young by singing his “Deep Dark Wells,” originally written as a poem to a brother in prison. The set left many talking about his potential for stardom. 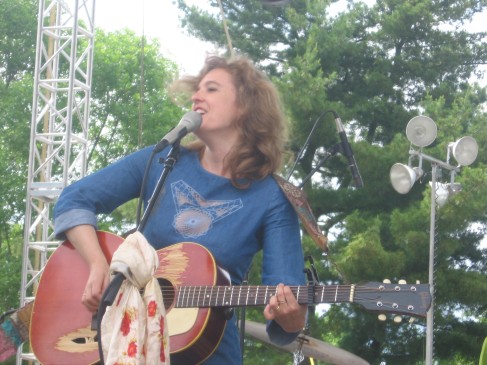 Another folk-rock singer-songwriter who wowed the crowd was the more established Tift Merritt, the former North Carolinian making her first visit to Nelsonville. The surprise during her Sunday afternoon set was just how hot – how rockin’ – a stage presence she is. With her trio providing rousing support, she would swing her guitar and let her auburn hair flow, moving like a rockabilly savior cutting loose. Or she would play keyboards like she was leading a stomping garage-rock band onward. Besides her own songs like “Mixtape,” “Traveling Alone” and “Spring, ” she chose some potent and not overly familiar covers – James Carr’s “Your Love Made a U-Turn” and Tom Waits’ “Ain’t No Train.” She left the stage leaving many thinking she’s Emmylou’s heir apparent – or Wanda Jackson’s.

Jonathan Richman’s set on Saturday afternoon didn’t have the biggest crowd of the fest, but he had some of the most devoted attendees. They are acolytes and they get as close to him as possible.

It was just him, wearing a long-sleeve shirt in the heat, on acoustic guitar with drummer Tommy Larkins. The songs were relatively familiar, too – a snatch of “That Summer Feeling,” “Because Her Beauty Is Raw and Wild,” “Let Her Go Into the Darkness…” But as someone who has been catching Richman since seeing him in Boston in the early 1970s, I’ve noticed he has gradually changed. Where once the lure of his act was the naïf-like goofiness, the child-like innocence, of his persona (especially after he appeared in There’s Something About Mary),now what stands out is how he lives by his humane principles. He stands for following your artistic sensibilities and making a living out of it, being generous on stage, and maybe even imparting some wisdom in his off-handedly digressive and seemingly spontaneous way.

There were several “developing” acts – for lack of a better term – whose sets impressed at Nelsonville. Sharon Van Etten showed she’s nicely evolving from a performing songwriter to a rock act, growing comfortable with a band, electric guitar and an increasingly effective, forceful vocal range on her hypnotic mid-tempo songs like “Don’t Do It” and “Peace Signs.”

Wussy, the scrappy and highly praised Cincinnati quartet (augmented at Nelsonville with a pedal-steel guitarist) whose songs’ lyrics can be hauntingly poetic, played a blisteringly defiant Saturday-night set, on a secondary stage opposite Wilco. There was just a determined scattering of fans there, despite co-singer/guitar Lisa Walker’s plea for fans to text friends at the Wilco set to come over. The band deserved better than this Wussy-Wilco showdown where the underdogs never had a chance.

Lee Fields, a classic-soul singer just finding a wide audience at age 60+, killed with his band the Expressions and a repertoire of  contemporary songs that mixed Wilson Pickett-ish raw deep soul with a hint of the disco-Caribbean lilt of 1970s-era TK Records. And on workouts like “Faithful Man” and “Wish You Were Here,” James Brown was probably smiling from above. If there is an above.

But for great soul music, even Fields couldn’t trump the Sunday afternoon set by the large gospel ensemble (singers and band) Flying Clouds of South Carolina. They turned a religious number that sounded a lot like the Valentinos’ classic “Lookin’ For a Love” into an almost-half-hour ecstatic reverie that featured their trim, energetic white-haired co-lead singer leaping and jumping, as if trying to launch into that heavenly “above” from a trampoline. It was a revelation.

But so, too, in a different way was festival-closer John Prine. Debonairly dressed in sport coat, dress shirt and bolo, with lead guitarist Jason Wilber and bassist David Jacques equally well-attired, his presence gave the event’s closing hour the aura of a formal party – a commencement address. Prine has had his health problems, and he looks like he’s had, but (and maybe this is the reason for the clothes) he also looks like he’s faced it with dignity, resolve and respect for life. Yet all that went uncommented-upon during his set. Instead, he thrilled the crowd with persuasively sung and played versions of his material. The arrangements were tight yet never pro-forma; his own guitar work was rousing. And what a great, deep catalogue he has.

The funny songs had a singular kind of eccentrically winsome folk wisdom  (“Spanish Pipedream,” “Fish and Whistle,” “Don’t Bury Me”); the story songs had the depth and nuance of novels (“Donald and Lydia,” “Sam Stone”); and the straightforward observational songs about relationships were heartrending and wise (“You Got Gold,” “Storm Windows” and the monumentally magnificent “All the Best” with its couplet “Then your heart gets bored with your mind and it changes you”).

Prine isn’t maybe as widely heralded in pop culture as an influential elder singer-songwriter on a par with Dylan or Leonard Cohen. But he has a following that reveres him. At Nelsonville, the audience knew and sang along with virtually every song and called out for more. Some of Prine’s tunes people liked because they were witty, others (as in the early composition about elderly loneliness, “Hello in There”) because he saw a sad universal truth way early (and expressed it openly and sweetly). People seemed not just to like Prine, but to need him as an antidote to whatever malaise, physical or spiritual, ailed them.

And Prine knew he was connecting. He joshed and extended the show – it was an almost 1½-hour set. There were two encores, and everyone left spent.

When Prine departed, he left as a giant. And he left Nelsonville 2013 a memorable triumph.

There were other strong acts I saw that I just can’t describe in depth even for a reasonably long feature like this. So, forgive me Anais Mitchell & Jefferson Hamer, Calexico, Michael Hurley, Cotton Jones, Catherine MacLellan, and He’s My Brother She’s My Sister (with their crowd-pleasing, tap-dancing, fashion-plate drummer Lauren Brown). Your sets all were strong. Come back next year. I will.

(All photos by Steven Rosen. This first appeared in http://www.blurtonline.com; edited by Fred Mills.)