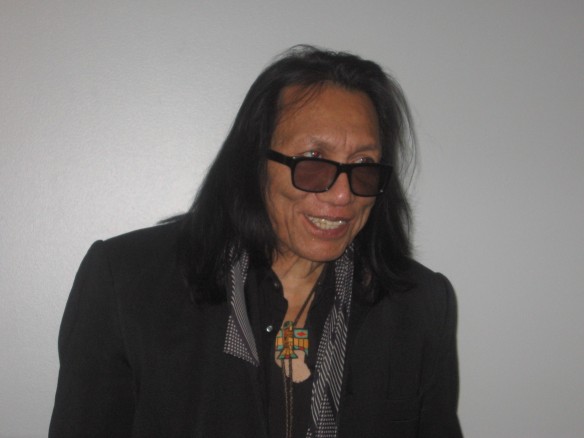 (Currently riding a crest of newfound attention thanks to the recently released documentary film about his unlikely career, the Sugar Man himself arrived at Columbus’ Wexner Center for the Arts on November 1 – and he was out to mix a little mischief into his music.)

At age 70, Sixto Rodriguez has become an American folk hero. The two politically trenchant folk-rock-blues albums that the Detroit singer-guitarist put out in 1970 and 1971, overlooked in their time and long out of print, are now reissued and healthy sellers. The documentary Searching for Sugar Man, chronicling how he became popular in South Africa without ever knowing it, has been a surprise hit and is favored for an Academy Award nomination. And CBS 60 Minutes even profiled him.

So he has emerged from decades of working as a laborer in Detroit to start touring the U.S. If the hushed, reverent, sold-out crowd at Columbus’ Wexner Center is any indication, he is being welcomed with the kind of awe and respect that once met rediscovered musicians like Dock Boggs or Mance Lipscomb during the great blues and folk revival of the early 1960s. He is the wise elder, returned from exile.

So how did Rodriguez – who comes across as shy and quietly self-effacing in the movie and on the 60 Minutes segment – accept this adulation? Weirdly. Here’s an example:

“Let me tell you my Mickey Mouse joke,” he said from the bare stage, holding what appeared to be, and what sounded like, an amplified acoustic guitar but had the sleek body of an electric. He then recounted how Mickey and Minnie went to a marriage counselor, who told Mickey it would be wrong to divorce her just for being dumb. “I didn’t say she was stupid,” Mickey replied in Rodriguez’s joke. “I said she was fucking Goofy.” Long laughter followed.

So much for that all that folk-hero-worship stuff. Rodriguez is out to mix in a little mischief with his music. He also has his quirks. Considering that his own music has a rockin’, talking-blues quality that shows the influence of “Subterranean Homesick Blues” or early Donovan, you might think he’d cover a song or two by his peers.

He does do covers, but they are either standards like “Just One of Those Things” and “I Only Have Eyes for You,” or jazzy, soulful oldies like Lou Rawls’ “Dead End Street” and Little Willie John’s “Fever.” (He gave John, who was from Detroit and who recorded for nearby Cincinnati’s King Records, credit as a local hero, which the Columbus audience appreciated.

Rodriguez’s resonant, slightly weathered and highly expressive voice was well-suited for these songs, as was his guitar work, and I see a Rodriguez Does Standards album in his future.

But until then, he also gave people what they came for – songs that the Sugar Manmovie has made well-known, forty years after they were recorded and promptly overlooked the first time around. (Light in the Attic, a Seattle label, did get the ball rolling first by reissuing Rodriguez’s Cold Fact and Coming From Reality in 2008-2009.)

At the Wexner, he played “Sugar Man,” “Crucify Your Mind,”  “I Wonder,” “Like Janis” and  “This Is Not a Song, It’s an Outburst: Or, the Establishment Blues” to a crowd who took the song’s worth and renown, as a concrete cold fact. Rodriguez now has a canon.

His set was short, about an hour with no encore. He did not radically change his songs or use them for improvisation, which was too bad as a stretched-out “I Wonder” would have been quite a crowd-pleaser with its Motown rhythms.

With his long black hair, hat and shades, wearing a suit over a sleeveless, V-neck black muscle shirt, he had remarkable stage presence. He removed the jacket about halfway through, revealing a physique that could make him the envy of any AARP gathering.

And he is very relaxed on stage. While he needed guidance to get up the steps onto it in the darkened room, he held the spotlight confidently. He developed an easygoing repartee fairly quickly, and some of his comments had a provocative edge and bite. For instance, he offered to tell the crowd the secret of life  (“breathe in and out”) and the mystery of life (“you never know when it will end”).

Rodriguez’s comeback fits into a larger narrative about this year’s resilience and reemergence of Detroit in American life. Bettye LaVette, although she now lives in New Jersey, has showed on Thankful N’ Thoughtful that it’s never too late for an overlooked Detroit R&B singer of the 1960s to find her audience. The documentary Detropia has been a hit, often following Sugar Man into art houses. The Tigers made the World Series. And President Obama’s rescue of the auto industry turned out to be the key issue (in Ohio) that got him – and his progressive, hopeful view of America – reelected against the reactionary Republicans.

Rodriguez fits into that narrative, yet he’s not really having it. He sees the city through his activist eyes – he once ran for mayor. He told the crowd that “only when I left Detroit did I learn people smiled.” He also decried political corruption in the city.  Someone shouted for him to run for mayor again, and he responded like he’d consider it.

He ended the show with heartfelt thanks and a “power to the people” fist. And he made his way to the merchandise booth, where his newfound fans were lined up awaiting him.